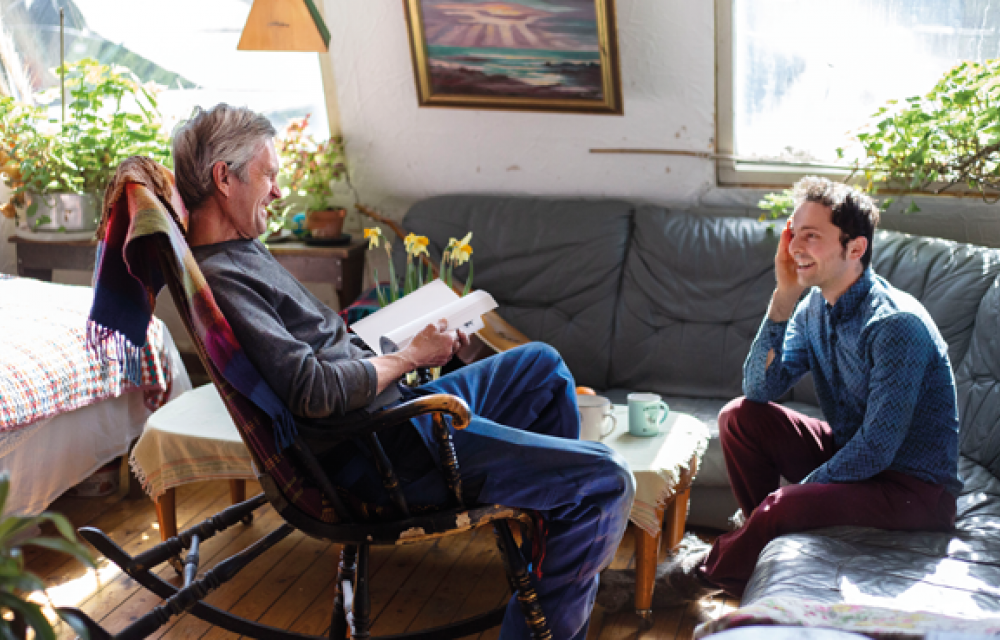 Willy Palm (left) and Mahmut Agbaht (right) enjoy sitting in the sofa telling each other stories in the evenings.
Foto: Photo: Anneli Modin

Home in a floating story vessel

Lina Svensk / cred@ergo.us.uu.se / Hemma hos / Publicerad 2019-05-14 14:27
Trading a concrete box for a floating bohemian home was an easy choice to make for PhD student Mahmut Agbaht. Ergo met up with him for a tour of his new lodgings in one of the houseboats of Fyrisån.

It’s one of the first genuinely warm days of spring. The trees along the river are impatiently waiting to burst with greenery and people already seem to be in Easter holiday mode, though Maundy Thursday (Skärtorsdagen) is still a day away.
I spot Mahmut Agbaht, a PhD student in Semitic Languages from Turkey, sitting in a brown leather sofa inside one of the houseboats by the south end of Östra Ågatan, and knock on the window. He invites me in to what is a surprisingly large floating one-room apartment. He moved here only three weeks ago and shares the space with Willy Palm, chairman of the NGO Fyrisåns vänner (Friends of Fyrisån) and general utility-man of the houseboat community.
– I love collecting stories and fond memories. You can’t easily get that by living alone in a concrete box, answers Mahmut Agbaht to the question I didn’t even have to ask: why would you choose to live in a houseboat?
Mahmut used to live in a “concrete box” in Sysslomansgatan, but wanted to move to a collective where he would have other like-minded people around him.
– But most collectives want you to move in straight away and I had a two month notice on the apartment in Sysslomansgatan, so that didn’t work out, he says.
A friend introduced Mahmut to Willy, and he decided to test out the boat life for a while to see if it suited him. So far he seems content.
– I wanted to live close to nature but not too far from my work, so this is a perfect compromise. Also, Willy is a very good storyteller, he says.

Mahmut’s somewhat bohemian attitude seems to match the interior of the houseboat, which is, to say the least, eclectic. The walls and surfaces are covered with various art items, memorabilia, musical instruments, and knick-knacks from all over the world. Traces of Willy’s former tenants and guests. Mahmut says he tries to own fewer things these days, but on the wooden desk – his workplace on board – some of his belongings are displayed behind his laptop.
– This is dry sap from a “crying” tree, he tells me, and holds up a jar full of small amber-like stones for me to smell – like concentrated freshly-chopped wood.
– It’s called frankincense, you burn it like regular incense. But regular incense is like instant coffee compared to this stuff, Mahmut says.
And of course, no workspace is complete without a personal coffee or tea mug. Mahmut’s has a moose on it.
– I got it from a moose farm. Everyone had told the guy who started it that he was crazy, but today it’s very successful, with heaps of tourists visiting every year.
Everything Mahmut shows me in the room has a story, which he has soaked up like a sponge these past few weeks. A force of habit from his professional life perhaps, as much of his research entails collecting stories. Right now he is working on the Arabic dialects spoken by Christian communities in the mountain villages in the north of Lebanon.
– I did fieldwork in these villages for about three months. In my research I tend to look for great storytellers, like old men and women who’ve lived their entire lives in the same village.

As he has got most of his collected data on his computer, the question of Wi-Fi has not been much of an issue thus far when Mahmut is working from home. When needed, he uses his phone as a hotspot. Of course, limited Internet access is just one of the challenges with this non-conventional way of living.
Again, Mahmut anticipates my question.
– You might wonder about the toilet and washing situation? For the kitchen sink we have a water tank under the floor that we fill up. It makes you more conscious of how much water you use when it’s limited in this way. As for the toilet, there is a decent one and a shower about a two or three minute walk from here, but for emergencies or when you don’t feel like walking if you wake up in the middle of the night we have a small camping toilet in the storage room.
Other inconveniences you might expect from living on water has not yet troubled Mahmut, though to be fair, he hasn’t lived in the boat during winter. Willy Palm, who has lived here for quite some time, avers that winter isn’t a problem. His leisurely charisma and the fact that he has lived on the boat for such a long time suggests that he might have a more pragmatic attitude towards the problems of winter than most people. But then again, the room has a small stove in the middle of it, so it might actually not get as cold as you would expect.
But what about rough sea and potentially falling over board?
– I miscalculated my step when I was picking up trash from the river and fell, but only my foot got wet, says Mahmut.
Willy, on the other hand, has fallen into the river many times, but less and less so the longer he has lived there. You learn to move with the boat, he explains. But getting your foot wet now and then might be a cheap price to pay if you get to live like this – closeness to both city and nature, sun decks in the front and back of the boat, a close-knit and supportive community and a home full of curiosities and stories.

So how does one get the chance to live in a houseboat in Fyrisån? Well, according to Willy, you won’t.
– You stand in line and then it will never be your turn unless you have a k-märkt [preservationally protected by law because of cultural interest – Ed.] boat, he says.
Mahmut feels lucky he got the opportunity to live in the houseboat with Willy and hopes to have a housewarming party soon for his friends.
– I’m so happy with my choice to move here, I could see myself living in a houseboat long term.
After living in Ankara for ten years, I wonder if he will not miss living in a large city and if he might move back after he has finished his PhD.
– Not really. I know what I enjoy outside of work – nature and cultural events; you get a lot of that in Uppsala. I don’t have concrete long-term plans yet, but what I can say is that I can imagine myself living in Sweden if I get the opportunity.

Welcome to the mysterious and minimalistic room of Cesar

Welcome to the cosiest living room in Flogsta

Hemma hos
2021-03-01 09:34
With personal photos, second hand knick-knacks, and felines of all shapes and sizes Emelie Alsheim has made one of the…
Läs mer