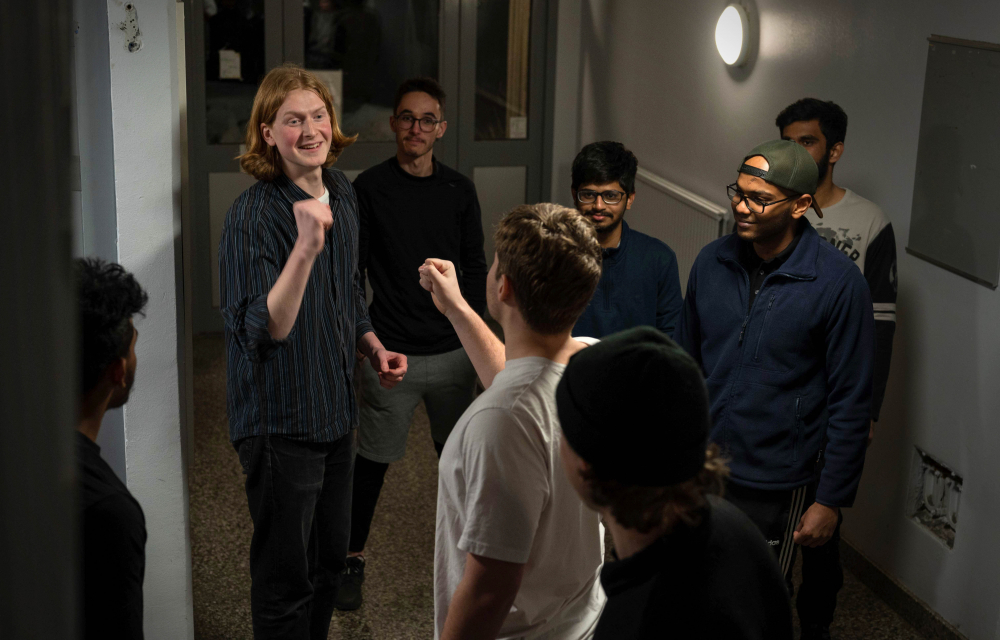 Maria Brix Rasmussen / Reportage / Publicerad 2021-02-23 15:14
In the midst of the pandemic winter, when nightfall comes, the entrance hall of one of the Flogsta buildings is turned into an arena, where a sport originating from colonialist oppressors brings students from around the world together in a wonderful social melting pot.

When darkness falls on Flogsta, something strange, unusual and beautiful happens in building 6. If you thought the daily Flogsta scream was the only unique event happening at 10 pm in Flogsta, you were definitely wrong! At ten, the entrance of building 6 becomes the scenery for an international cricket tournament, where people from different cultures all around the world participate.

I was first introduced to the game by Diany, my Indian friend in my corridor, who used to play cricket a lot in India and who also introduced everyone to the game three months ago. The cricket tournament going on in building 6 doesn’t resemble original cricket much, since the original version takes place in a big outdoor oval-shaped grass field usually far away from Sweden. Therefore, the players have had to adjust the game and the rules a little. 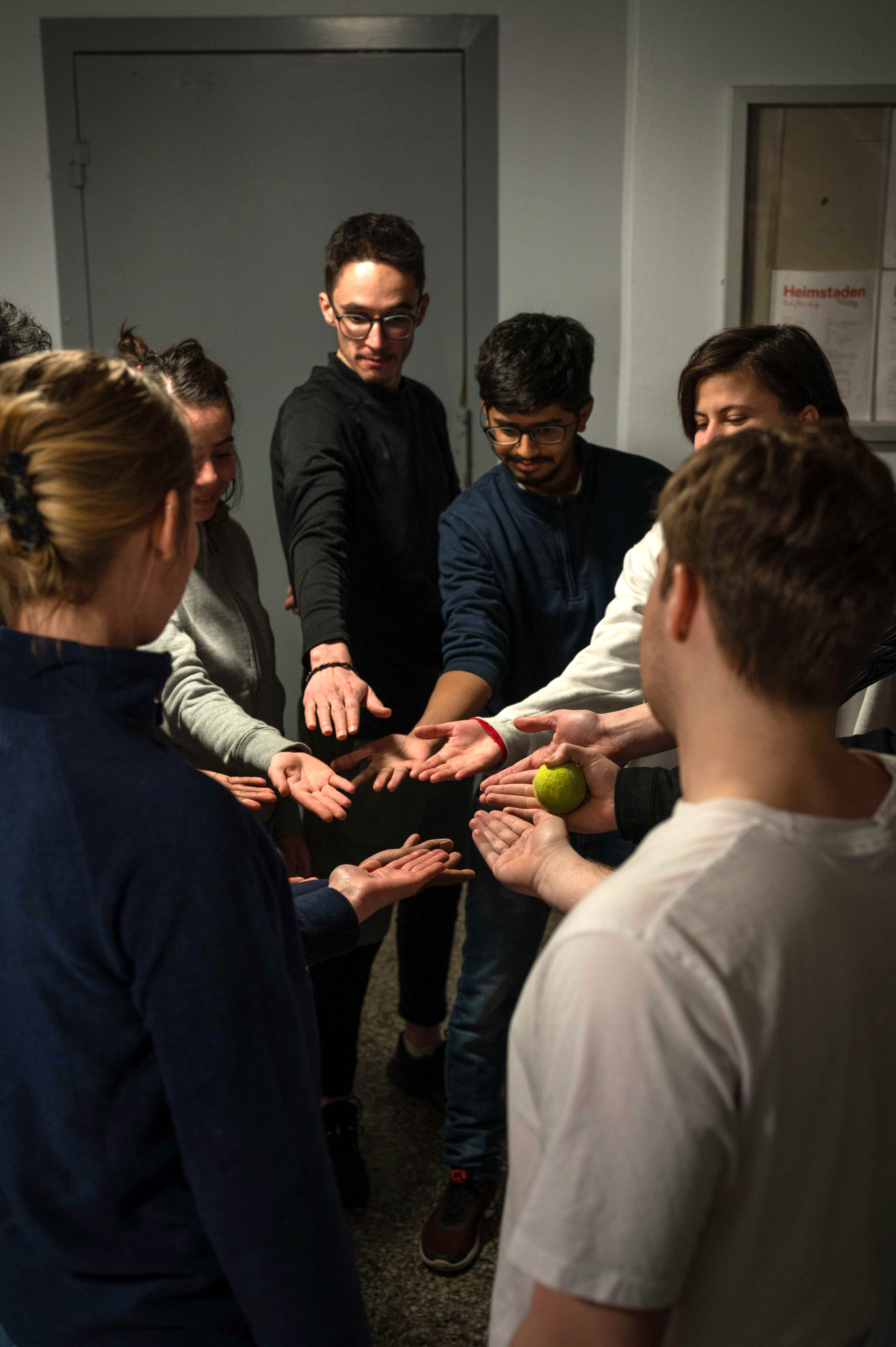 The alternative Flogsta cricket consists of a batsman and a baller, where two teams take turns in playing. The players are divided into teams and change teams in every match. Today the division is led by the very energetic Omer from Sudan, who also happens to live in my corridor, where the whole idea about playing cricket first occurred. While the whole group is laughing, Omer keeps counting too fast in Arabic and eventually someone else takes over so the draw can continue. This little scene shows exactly how the fine balance between the seriousness and the fun in the game is maintained.

When looking at the players and their spirit from the staircase where I sit, it is not a surprise how this game attracted a lot of people, and if it wasn’t because I was already a well-established player, I would easily have gotten interested in the game just by walking by. While the players are having a small break, I ask Diany why he thinks playing cricket has become so popular here.

– I hope that a game like cricket can gather more people since it’s a physical activity. Especially in the winter where people can’t play outside. It can be whatever the game. It’s actually a very big social thing rather than the actual game. 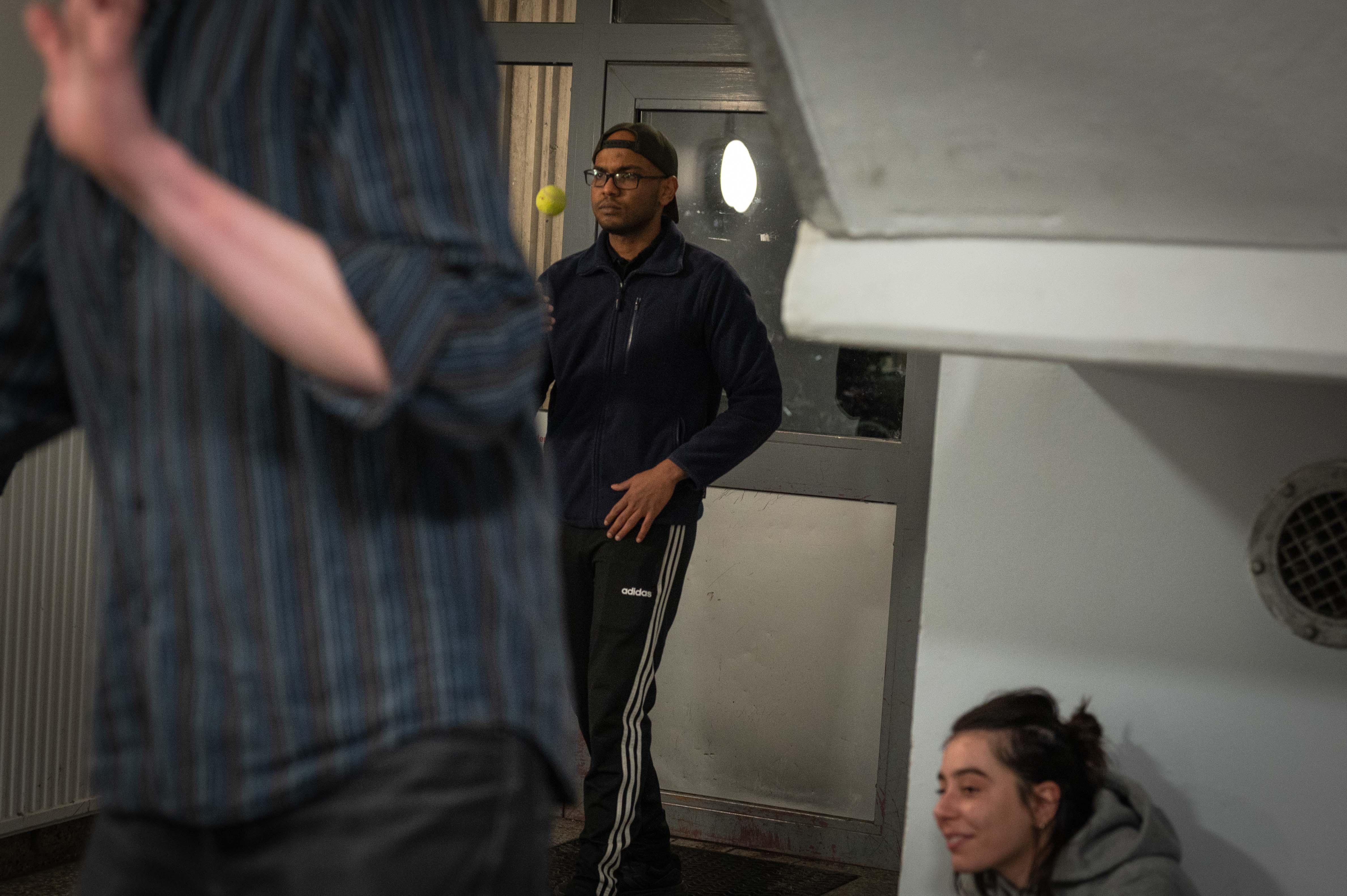 Omer Mohamed is getting ready to throw the ball at the batsman. To the right sits Afrodite Kontse, observing the game. (Photo: Miriam Hauertmann)

Each team chooses a captain and the two captains play one round of rock, paper, scissors where the winner decides which team should start batting or bowling. Every player has to bat and bowl, and the batsman needs to protect the so-called wicket behind them which in this case consists of two cardboard boxes. The bowler’s task is to aim for the wicket, and if the wicket gets hit, you’re out and another batsman from the team takes over. The batsman and his or her team gets points by hitting the ball and especially hitting the wall behind the bowler, since you achieve four points by doing this. You win by having the highest amount of points.

Armand, a French guy also from my corridor, has only lived here for five weeks and he also got attracted to the game from the beginning. For Armand, it was more a question of participating in the social activity and to get to know his new corridor mates which also resonates with Diany’s answer. Diany interrupts and states:

– But you’ve become damn good at playing since - the best batsman. 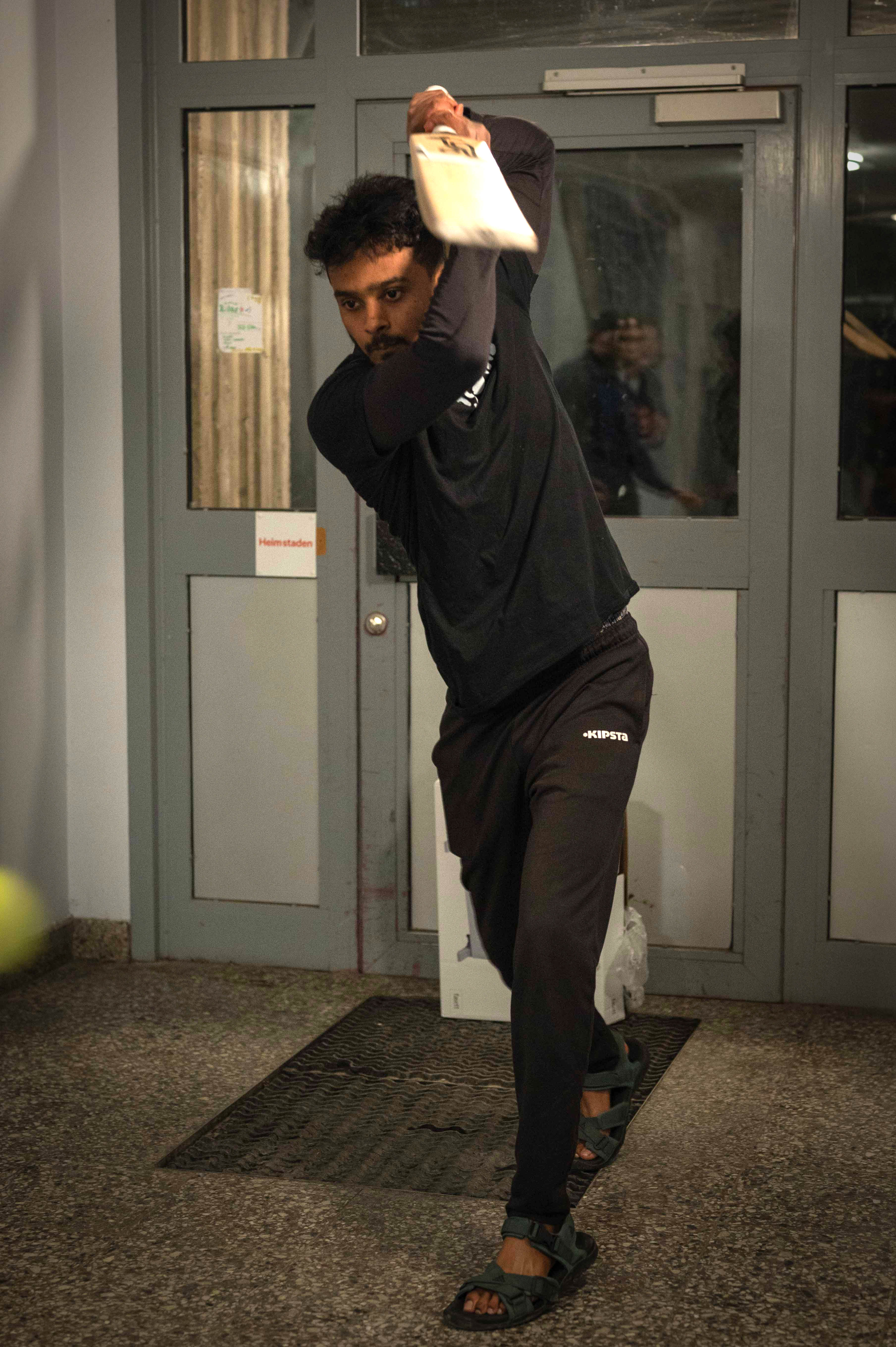 With a good combination of concentration and precision, Diany hits the ball thrown by Omer. (Photo: Miriam Hauertmann)

Just as Diany is about to ‘swing the ball’ as he expresses it, a few people are passing, and the players pause the game while the batsman politely opens the door for the people to get out of the building. Judging by their facial expressions, most seem to enjoy the dedication and enthusiasm from all the players. The game usually consists of 6-7 regular players, but since the beginning of this quite alternative cricket game, people have invited different friends and corridor mates to participate, where some continue to come back while others only try it once. However, one thing is sure; no matter the skill and experience, everyone is welcome which again highlights the importance of the social gathering happening here rather than the actual game.

"Maybe this is also our way to fight against the world situation as it is right now."

While Tarun, another Indian friend of mine, is waiting for his turn to bat, I ask him a little about the story and the evolution of cricket. With his back resting against the wall, he calmly explains that India wanted to build its own strength by fighting back the British through the game since it was originally introduced by the British colonists during the 18th century. Cricket is now the (unofficial) national sport of India, and they have even out-played the British several times. Omer adds:

– Maybe this is also our way to fight against the world situation as it is right now. To fight loneliness and play together against the invisible power of the pandemic.

I think Omer is right. This is not entirely about cricket, this is a team sport where social powers are built between and across cultures. Cricket in building 6 has thus become a fellowship founded by mutual interest for the same sport and for the social gathering happening here. The entrance of building 6 is not just an empty space anymore, but a space filled with hope for the future. 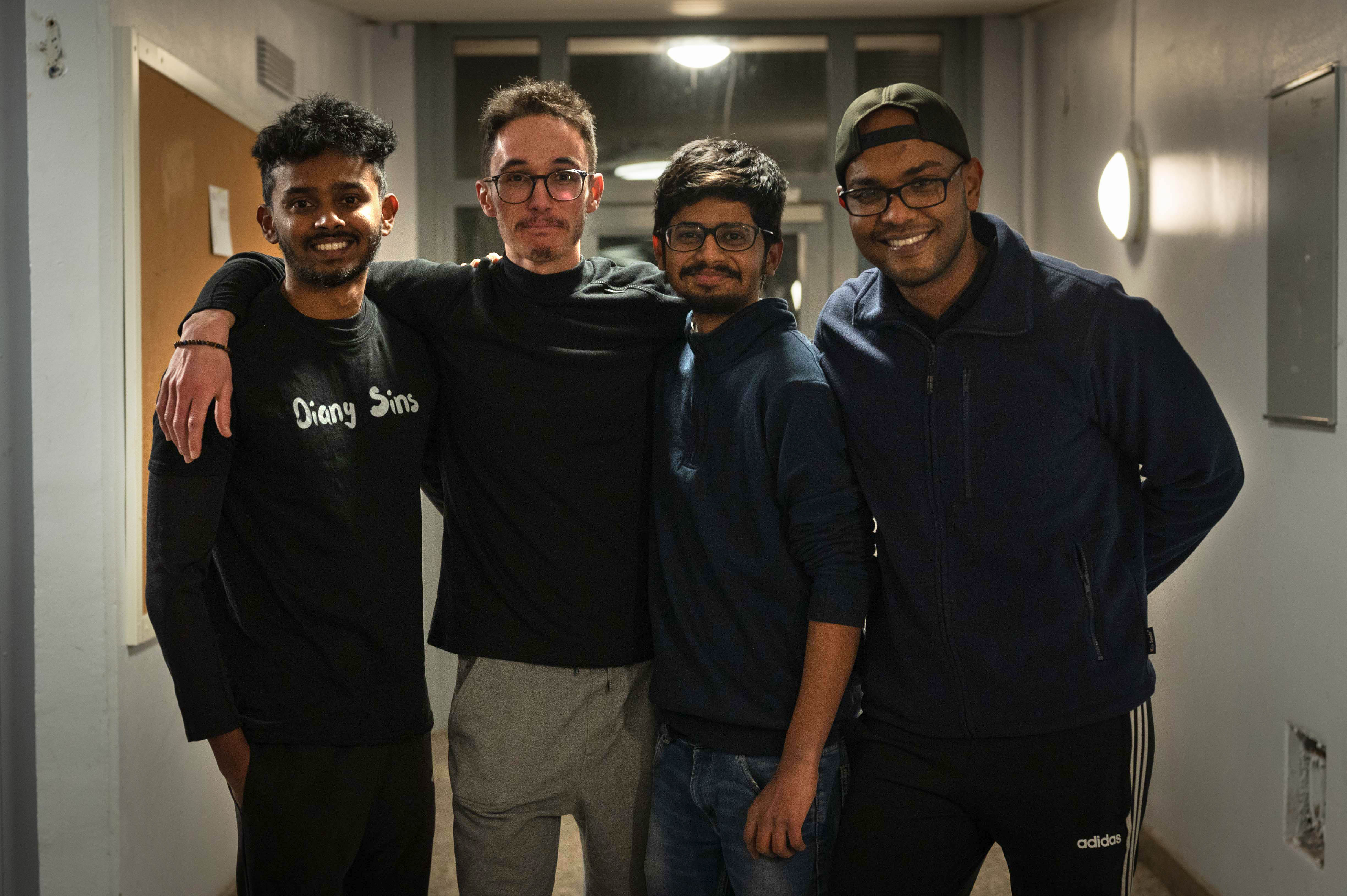 Four happy friends - both in and outside the 'field'. (From the left: Dianeswarr “Diany” Shanmuga Sundaram, Armand Douce, Tarun Jaye, and Omer Mohamed). (Photo: Miriam Hauertmann)

Reportage
2021-06-09 11:27
Several students living in the Flogsta high rises have been plagued by bed bugs this past year. We sought to find out…
Läs mer

Reportage
2021-02-17 10:42
This Valentine’s Day, students gathered in the fields outside Flogsta to make the most of the snow. Ergo paid a visit to…
Läs mer