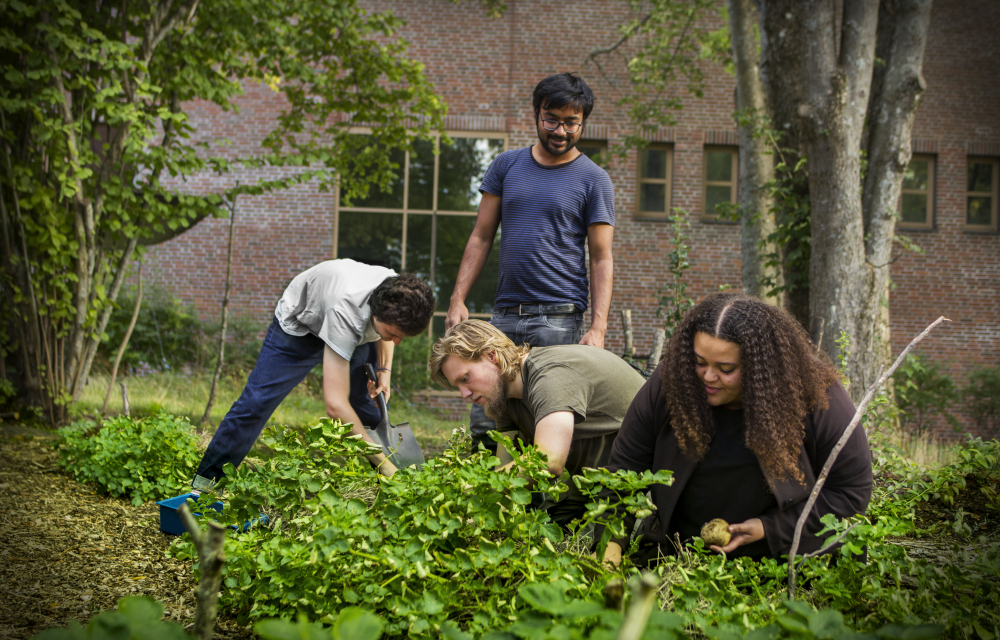 Foto: Potatis
Simon Wentritt, Sagnik Sinha Roy, Erik and Otilia Björndahl João are digging up potatoes. Some of the vegetables will be served in the stew they are cooking at the harvest fest this Saturday (September 18).
Foto: Sandra Gunnarsson

The Campus Garden is getting ready for harvest fest

Lina Svensk / cred@ergo.us.uu.se / Reportage / Publicerad 2021-09-14 13:35
The volunteers and driving spirits behind Uppsala University’s Campus Garden are preparing to host their very first harvest fest this Saturday, only six months after they broke ground. On a sunny autumn afternoon, Ergo visited the garden – a student initiated climate project which seems to have been a hit right from the get go.

When Otilia Björndahl João and Sagnik Sinha Roy had their first open Zoom meeting for the Campus Garden at the beginning of the year, they were afraid nobody would show up.

– But when we opened up the Zoom room people started flooding in, Otilia says.

– Yes, most of them we didn’t even recognise, Sagnik fills in.

As it turns out, they had absolutely nothing to worry about. Since the first shovel of soil was turned back in April, more than a hundred volunteers – students, former students, senior citizens, families, neighbours – have gotten involved at one point or another, pleased to literally get their hands dirty to contribute to this on-campus food farm. 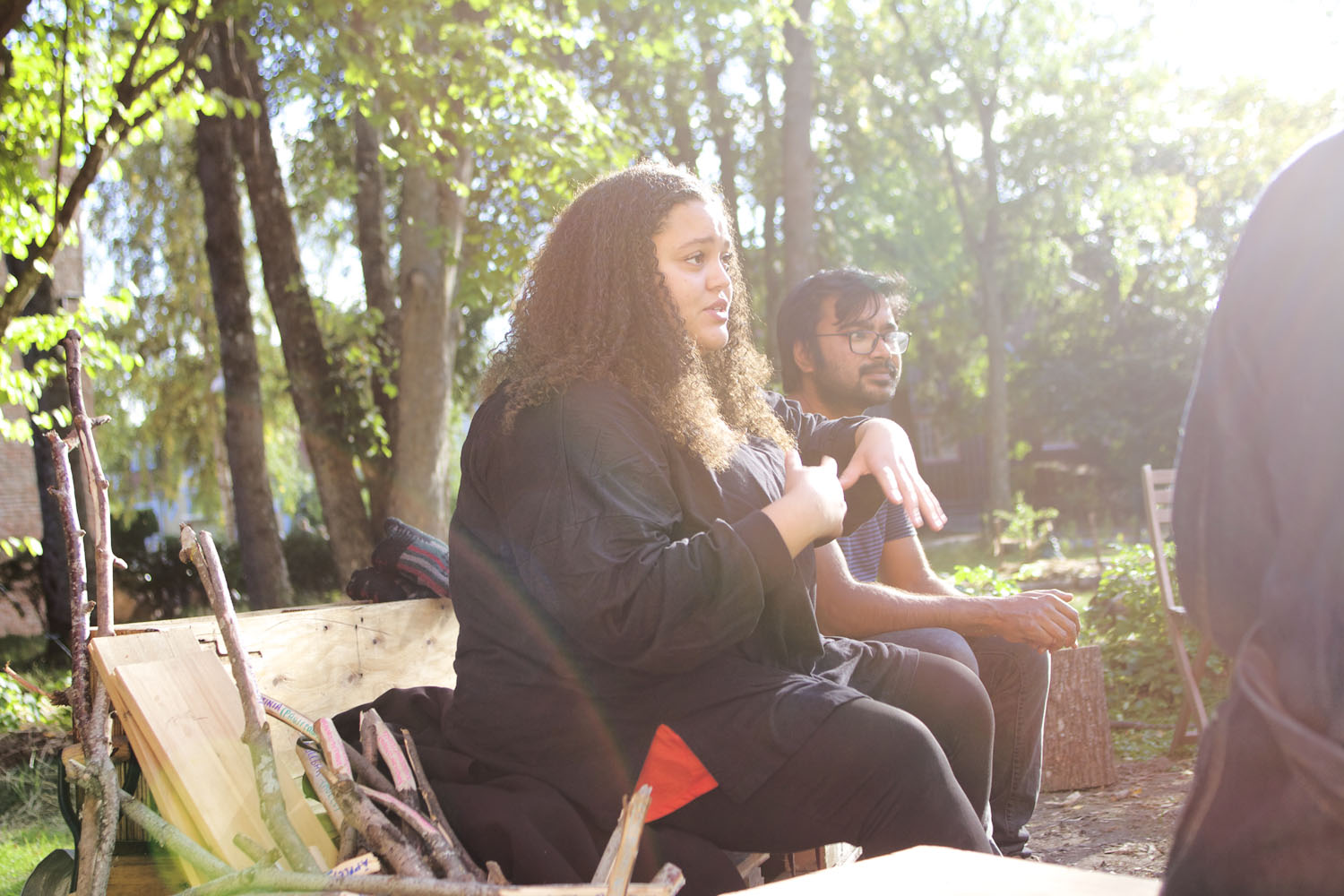 The project turned out so much better than Otilia Björndahl João (left) and Sagnik Sinha Roy (right) ever dared to hope for. In the beginning of the project the volunteers had to work in shifts in order to not break the covid regulations, though even with the restrictions the garden has been an excellent means of hanging out during the pandemic as the risk of spreading the infection lessens in the outdoors. They even had a movie screening in the garden a while back. “We watched Forrest Gump”, Otilia says. (Photo: Sandra Gunnarsson)

When Ergo interviewed Otilia and Sagnik in November last year, they had recently found out that their idea for a campus food garden was one out of seven projects that got funded through Uppsala University’s climate pot – money earmarked for projects aimed at reinforcing and invigorating the university’s efforts to reduce its climate impact. Back then they didn’t even know where they would lay out their garden and today, not even a year later, we’re basking in the September sun in their sustainable, 2 200 square meters big, food farm at Villavägen 14, next to the Botanical Garden.

Some of their crops – potatoes, beets, cabbage, strawberries – have already been harvested, but there is still a bountiful selection of produce – pumpkin, carrots, squash and more potatoes – waiting to be dug up, plucked and collected for their upcoming harvest fest on Saturday.

This is amazing! How does it compare to what you had in mind for the project?
– It’s way better than we ever dared to imagine! We were afraid to hope for anything this big and to get as many volunteers as we have, says Otilia.

The volunteers have been their greatest asset, both Otilia and Sagnik emphasize. 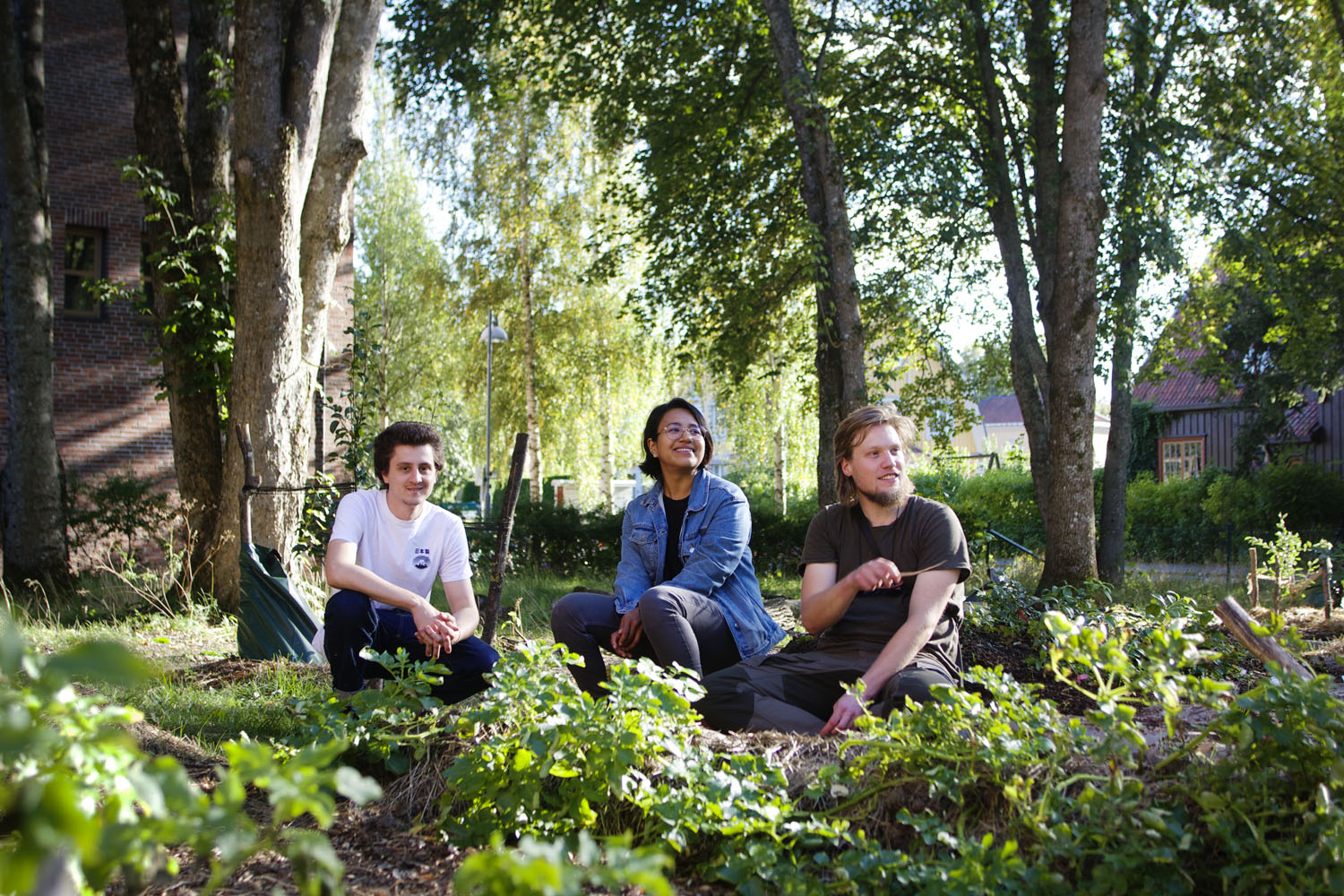 You don’t need to have green thumbs to join the Campus Garden: “It’s amazing what nature does on its own without the help from us”, says SLU student Erik (right), one of the volunteers. To the left of him is Erika Mendez, and furthest to the left Simon Wentritt. (Photo: Sandra Gunnarsson)

Three of the volunteers – Erik, Erika and Simon – are sitting next to one of the garden’s potato mounds. They all got involved with the garden in different ways. Erika Mendez from Mexico, a researcher in Immunology at BMC, walked by the plot when they had just gotten started in April and thought it looked interesting; Erik from Germany, a student at SLU in Environmental Management, got involved through the Flogsta Food community, where he met Sagnik and Otilia; And Simon Wentritt, a biology student, also from Germany, got involved together with his girlfriend who found out about the group through Facebook.

– I was just looking for people to hang out with because I didn’t know anyone here. And then my girlfriend found this group, says Simon.

"In the beginning of the project, we discussed a lot of potential scenarios, unexpected things that would happen, but we have been very lucky."

Otilia and Sagnik had a paid project position for the first few months as they were the initiators and responsible for managing the garden. Their salaries were supplemented by the Climate Change Leadership – a research node at Geocentrum. The costs for material were covered by the grant they got from the climate pot – 187 000 SEK – which has all been used up by now. A good chunk of money was spent on soil, tools and plants for the garden, which didn’t come as cheap as they would have hoped.

– We spent a lot of time trying to find the cheapest options. Since everything had to go through the university, we didn’t have the option to buy second hand or from smaller, local retailers, as their invoice system doesn’t allow that, says Otilia.

They would have liked to buy used furniture for the garden, used tools and more local and recycled materials, to make the whole project even more climate friendly. However, the limitations opened up for more creative solutions. Far from everything in the garden is “new” and bought. The furniture we’re sitting on was built by Otilia, Sagnik and the volunteers with recycled wooden pallets from the area. The same goes for the garden fences and signs – sticks with plant names on them put in the earth so everyone will know what’s growing where.

– Some of the stuff, like plants and seeds, has been gifted to us by different people, Sagnik says.

Otilia points out two big tomato plants that were given to them by a kind neighbour of the garden.

On the whole, this experience has so far been overwhelmingly positive, they say. Apart from an incident where they had their seeds stolen from outside of Geocentrum they have not really had any major setbacks.

– In the beginning of the project, we discussed a lot of potential scenarios, unexpected things that would happen, but we have been very lucky. Nobody has stolen our crops thus far, says Otilia. 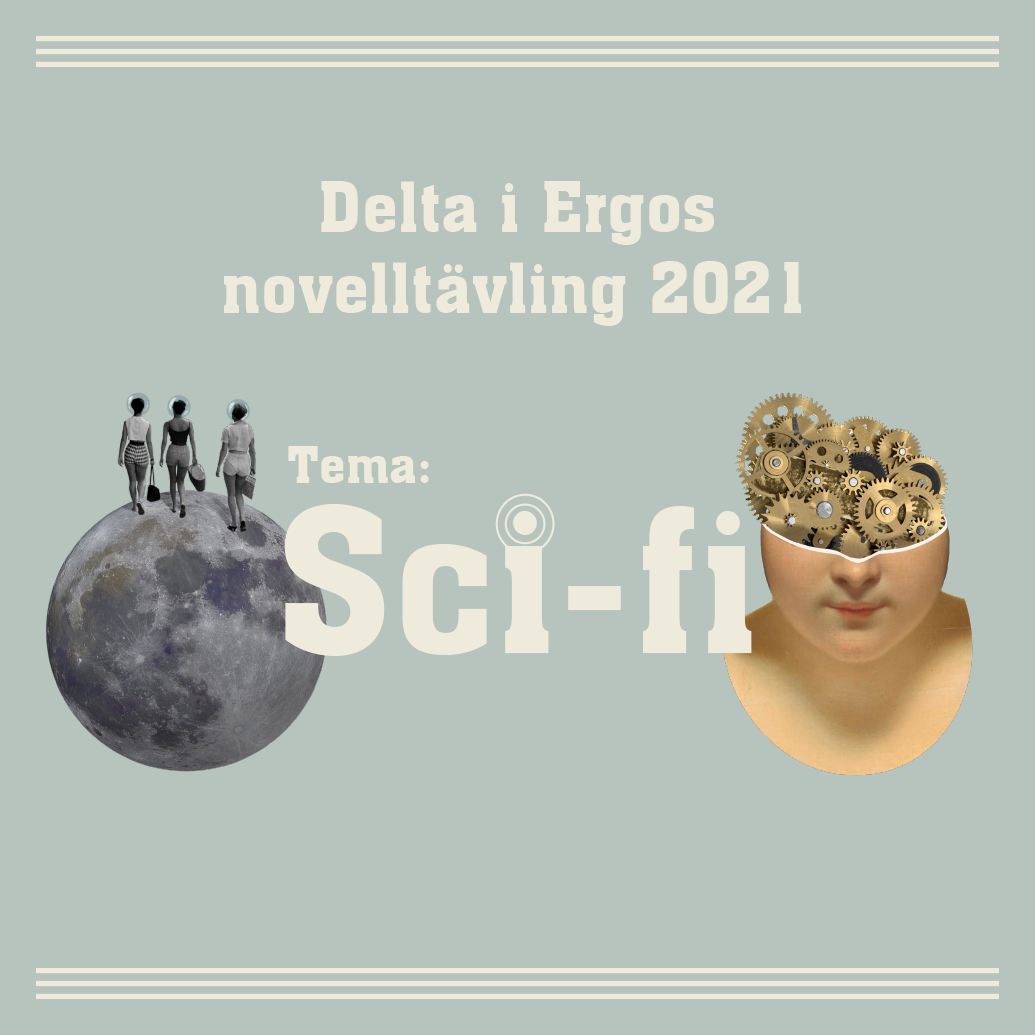 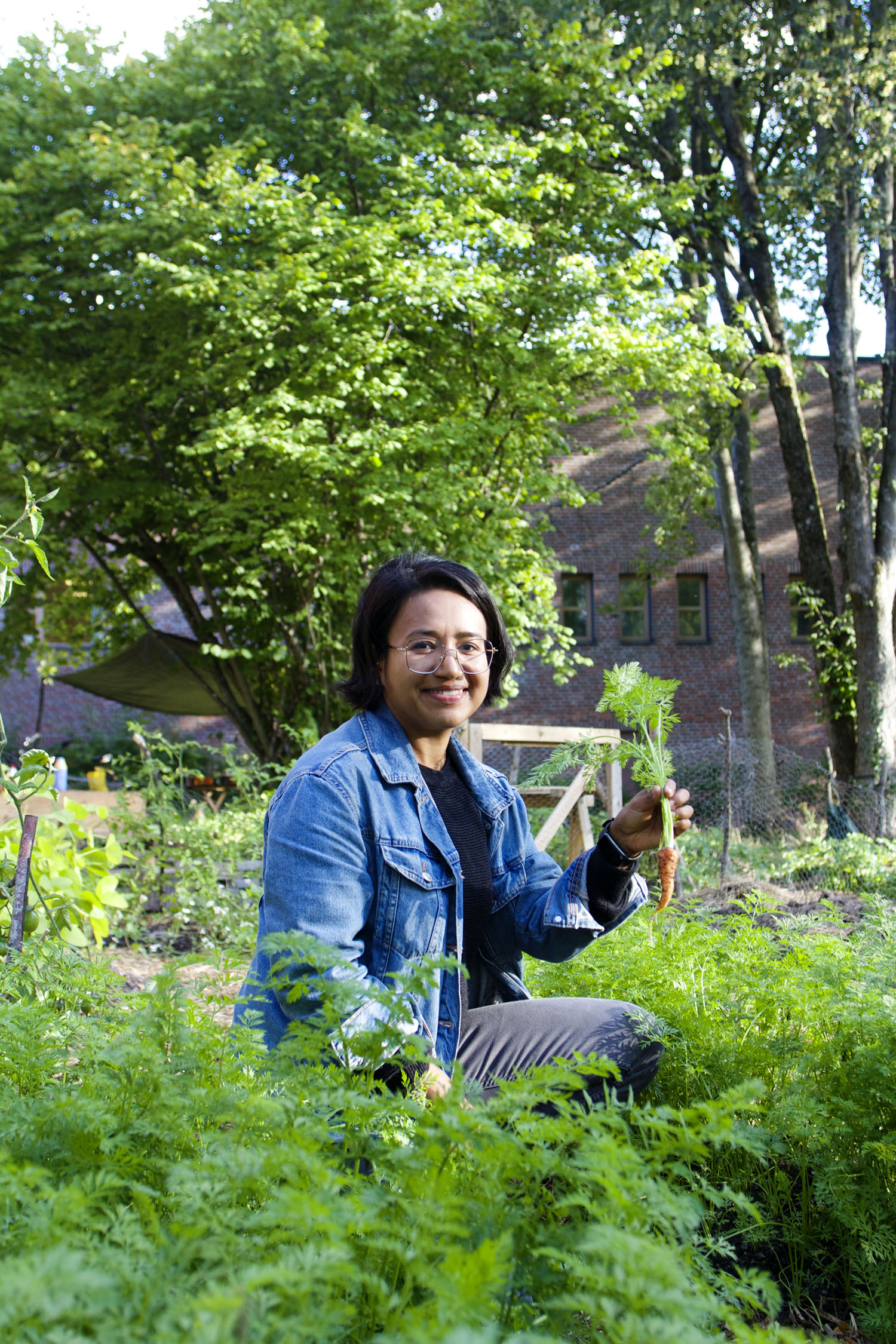 Erika Mendez is showing off some carrots from the kitchen garden. There are many different crops on the plot – apart from carrots, the kitchen garden holds tomatoes, chilis, pumpkins, squash, chard, and even grapes, among other things. Another area holds perennial produce – plants you don’t have to reseed every year – like asparagus and Jerusalem artichokes. To top it off, the garden has 16 different young fruit and nut trees, including pears, plums, cornelian cherries, walnuts, mulberries, medlar, paw paw, apples, peach and apricot. (Photo: Sandra Gunnarsson)

As we’re sitting in the garden, a lot of people walking by turn their heads and take a curious glance at what seems to be growing. Otilia says they got used to the stopping and staring and the curious questions when they first started digging the garden.

– Since things started growing, it’s less of “what’s going on?” and more of “what’s growing?”. But it has all been very positive. And the people living in the area seem to like it a lot as well, she says.

Just like the volunteer Erika, others have gotten involved after discovering the garden by chance.

You seem to have A LOT of volunteers in the garden – are you looking to get more or are you set for now?
– We always want more people to get involved! I would love it if more of the people living in the area wanted to be a part of this too. This garden has incredible potential. We even have a researcher experimenting on carbon sequestration in one area of the garden, says Sagnik.

– Personally, I would love it if we could get media and communications students involved to take pictures and help us with our social media presence for example. And it would be awesome if teacher students got involved and saw this as an opportunity to learn about practical outdoors pedagogics, Otilia says.

Exactly how they will continue to fund the garden now that the money from the climate pot has been used up is still unclear. As of now, they are not selling their produce (what they harvest is divided among the volunteers working in the garden on Saturdays), but that might be a possibility in the future, as well as getting university courses involved in the garden. 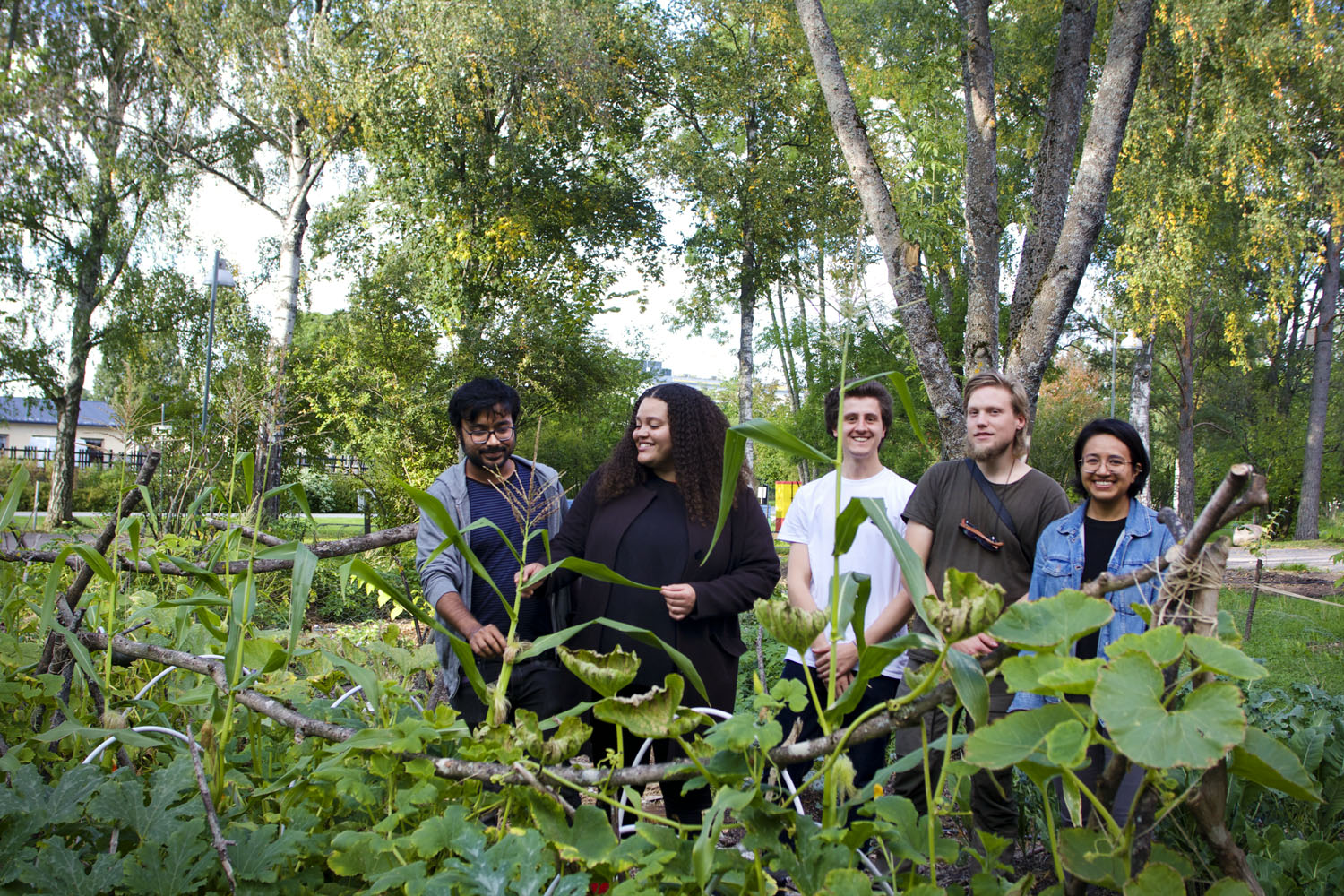 While some of the vegetables have grown from seeds planted directly in the ground, many were pre-cultivated by the people involved in the project. Otilia says she had her whole apartment in Flogsta filled with plants in the early spring, while Sagnik “outsourced” the pre-cultivating to friends who wanted more plants in their rooms. (Photo: Sandra Gunnarsson)

This Saturday though, September 18, everyone will be able to taste the produce grown at Villavägen 14 during the Campus Garden's first harvest fest. There will be music, crafts, a tour around the garden, and food made from the garden vegetables.

They’re hoping more people will realise the potential an on-campus food farm holds so that it might live on for a long time and hopefully be developed even further. Perhaps with a greenhouse or even an indoor area where they can propagate and pre-cultivate vegetables all year round. 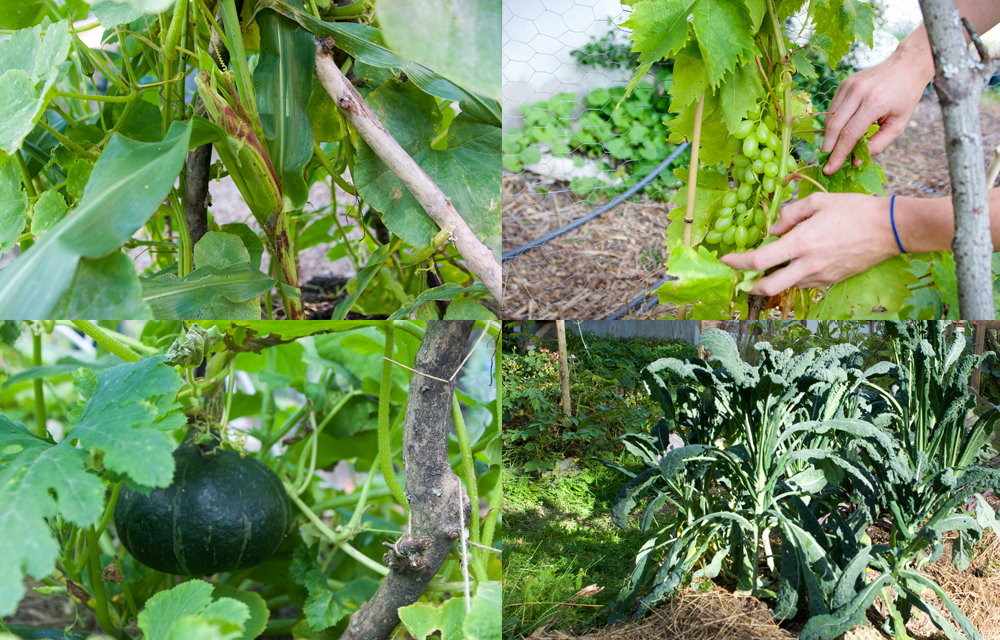 If you want to learn more about the background to this project and Uppsala University's climate pot you can read our article from last year, when we first met Otilia and Sagnik:

Reportage
2021-06-09 11:27
Several students living in the Flogsta high rises have been plagued by bed bugs this past year. We sought to find out…
Läs mer

Reportage
2021-02-23 15:14
In the midst of the pandemic winter, when nightfall comes, the entrance hall of one of the Flogsta buildings is turned…
Läs mer